Published in Culture Clash — a weekly column in The Tribune — on October 25, 2017

According to tabloid reports, a Progressive Liberal Party stalwart councillor said at a leadership candidacy event that Englerston MP Glenys Hanna Martin needed to know her place was in the kitchen. Perhaps more unfortunate than the statement was the ensuing silence. This seems to be the way it goes when people in positions of power make careless, hateful statements. Less than four years ago, a Member of Parliament “joked” about domestic violence yet no one in Parliament saw fit to respond with anything but laughter or silence.

The hatred of women and devaluing of women’s lives has become commonplace. We ask where we can find better leaders, how we can improve the economy, and why young people are not returning to The Bahamas, but jokes about violence against women continue, the masses vote en masse against gender equality in the conferring of citizenship and women daring to challenge men for positions of leadership are dismissed, ridiculed, and bullied.

Misogyny and patriarchy make their presence felt in the public and private spheres, creating environments where men can succeed and women must work harder and longer for the slimmest chance at success. Hatred and subjugation ensure women are continuously seen and treated as objects — tools to be used for the purposes of men.

Women determined to be more than the biblical “helpmate” and unwilling to play “the lesser sex” are frequently in a position we understand best in racial terms.

In African American families, it is not unusual to be told one has to be twice as good to get half as much. This is just as true for women; perhaps more so for black women.

In strategising and acting in direct response to hostile environments and people, women often find it necessary to prove knowledge, experience, capability and overall capacity, often having to explain away presumed obligations to family and household.

Zeal and ambition when recognised by counterparts can be used to turn women into pawns, disallowing full participation in the game because the pawn’s focus is on performance and perception rather than the whole game and its prize — power.

This dynamic is highly visible on the political stage. Women involved in frontline politics fight for the right to access the leadership pipeline in the face of dismissal, ridicule, and bullying — all while the country watches.

The political participation of women in The Bahamas, the Caribbean and the world has room for substantial improvement. Women in parliament in The Bahamas have accounted for 11-13 per cent of all MPs over the past few years.

Bermuda’s former Premier Paula Cox, Trinidad and Tobago former Prime Minister Kamla Persad-Bissessar and Jamaica former Prime Minister Portia Simpson-Miller are among recent women leaders in the region. Globally in June 2016, only 22.8 per cent of parliamentarians were women, doubling over a 21-year period. This year, only in Rwanda and Bolivia are women more than 50 per cent of single or lower houses of Parliament.

The under-representation of women in Bahamian politics is cause for concern, particularly when society depends heavily on women for a broad range of needs. Much of the work undertaken by women is unpaid labour.

In a presentation on the Economic Cost of Women’s Unpaid Labour at Equality Bahamas’ Women’s Wednesdays in September, Gender Specialist Audrey Roberts said: “Work falls into two categories — productive and reproductive. Productive work is paid for while reproductive or social reproduction is unpaid or low paid work.”

She highlighted the contrast between a woman doing domestic work in her own home and doing the same work in someone else’s home. In the first instance it is unpaid and in the second it is low paid. She noted unpaid work is vital to society, but primarily performed by women.

The alleged comments by the PLP stalwart councillor about Hanna Martin’s place being in the kitchen is a clear example of the devaluation of domestic work. He recognised there is work to be done in the kitchen, but ignored the obvious — Hanna Martin has paid work she must do and anyone can undertake the unpaid work in her home.

The demand for her to do unpaid work was clearly meant as an insult, though quite weak as it says nothing of her character, work ethic, or performance. It made a foolish assumption based on her gender and attempted to reduce her to her biological characteristics and gender norms.

Growing up and living in a misogynistic, patriarchal society is not easy. It is rife with challenges, many of which seem impossible to surmount until we do. Bahamian women have become experts in navigating this world and participating in frontline politics seems to sharpen those skills.

Hanna Martin’s years of experience in politics may have made her almost immune to such comments and similar behaviour of male colleagues, but what about younger women?

What about girls who aspire to make this country better for themselves and for the generations that follow? Are we moving forward, creating space for increased political participation for women and other marginalised people, or are we discouraging their participation and limiting ourselves to the usual suspects and their children and grandchildren while expecting change?

To see a shift in political culture and political participation at all levels, from involvement in frontline politics to voting, we must change our own behaviour. Beyond that, we need to change the way we respond to the behaviour of others.

Women are more than 50 per cent of our population, but only 10 per cent of Parliament. Is it time to push for a legislated gender quota as a temporary special measure to address under-representation of women in Parliament?

We must not forget even with the Free National Movement winning by a landslide, we still only have four women in Parliament which means the party did not focus on gender representation. The Progressive Liberal Party did not do much better with its own slate of candidates, even after pushing the gender equality referendum.

The Democratic National Alliance had more women than any major party, but was under the leadership of McCartney who refused to support the marital rape bill or the gender equality bills.

Is it time to demand more from political parties, ensuring their policies and actions are in line with their words? In addition to all of this, it is on us to hold women in Parliament and Cabinet accountable, pushing for them to speak to the issues directly affecting us, engage the media, and refrain from deflecting questions. While we are not a monolith, we know we are judged by the deeds and misdeeds of those representing us. Let’s do what we can to ensure that others have the same opportunities or better and do not suffer because we failed to support or to correct our own. 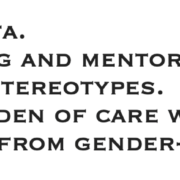