In response to the growing Black Lives Matter movement, QCT has been running a weekly discussion with young people looking at various forms of injustice on the experiences of young people today. This is part of the Trust’s wider work on considering historic injustice, which started in late 2019. QCT exists to champion, fund and connect young leaders around the world; this work is being driven by young people in its network and is helping to inform the Trust’s future direction.

In the special session last week, QCT was joined by The Duke and Duchess alongside Chrisann Jarrett, QCT Trustee and co-founder and co-CEO of We Belong; Alicia Wallace, director of Equality Bahamas; Mike Omoniyi, founder and CEO of The Common Sense Network; and Abdullahi Alim who leads the World Economic Forum’s Global Shapers network of emerging young leaders in Africa and the Middle East.

The above is taken directly from the Queen’s Commonwealth Trust press release. Read more about the conversation here, and watch the edited recording here.

In last week’s session, young people in the Queen’s Commonwealth Trust talked about what is taking place in their national and regional contexts in response to the Black Lives Matter protests in the U.S. We talked about the gap between gestures and meaningful action, the link between race and class, the tension between address issues at home and showing solidarity for actions abroad, and how COVID-19 and the stay-at-home orders may have helped to fuel the current movement and the global response to Black Lives Matter protests.

Every now and then, the conversation about the statue of Christopher Columbus starts again. It generally does not last for a long time, but people weigh in and we end up with the same sets of opinions. Some people think it should be removed from Government House while others think it should stay.

Of the people who believe it should be removed, some want it destroyed while others say it would be better to put it in a museum and provide context to make it clear he was not a hero, but a genocidal murderer. Most of the people who want it to stay seem to think it is must remain to preserve history. They view it as a harmless relic with little meaning attached and should not evoke any negative feelings.

Still others argue the statue is not the problem and suggest it is useless to get rid of it when Government House remains, the Governor General continues to represent the Queen and she is the head of state.

To be clear, the Columbus statue is not the entire problem. No one ever said it was that simple. We have, however, noted the issue of its prominent location which suggests it represents a person deserving of attention and reverence. We know this is far from the truth. It is not even accompanied by a plaque with the truth about Columbus and what he did after landing on San Salvador in 1492. 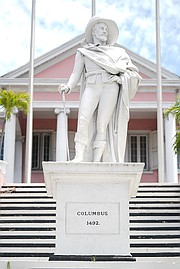 We cannot assume that people know the history. It was not long ago that Columbus Day and Discovery Day were celebrated. People in their thirties and twenties were taught a completely fallacious history about the man and would know no better if not for conversations of this kind.

We know the statue of Columbus is the tip of the iceberg. Beneath the surface is colonization, slavery and racism in various forms including systemic and internalised. We have not generally been enthusiastic about these conversations either. The lack of discussion has brought us to this place, barely able to sort through the interconnected issues that demand our attention if we are to move forward and build a more inclusive, equitable nation.

There is no shortage of issues to address that are both related to the statue we can see every day and rooted in systems that are hundreds of years old and that we have learned to ignore in our daily lives. Those issues need our attention, however, they do not detract from the point being made by the people who want the statue removed. It is in an inappropriate location. It sends the wrong message. There are no sound arguments for keeping it there. We will not be banned from discussing other relevant issues if we dare to move it before we eradicate racism.

Do we care more about where we start, or starting at all?

The response to the call for the removal of the statue has not been unlike many other conversations taking place nationally. There is an enthusiastic opposition that does not necessarily disagree with the idea, but is being excessively critical of the call because they would prefer a different starting point or want the conversation to be rooted in a different area. They want to focus on a larger issue. They assume the removal of the statue is a failure to acknowledge the complication of its site.

One of the reasons it is difficult to make progress on issues like this one is the need for people to control narratives and assert themselves as superior in knowledge. It is entirely possible to support the removal of the statue while calling attention to the existence of Government House, the role of the Governor General, continued allegiance to the Queen and the cost of this useless system.

We can make plans to move the statue in two weeks and sustain conversations about why it was put there in the first place and the work that still needs to be done up to and far beyond that date. We are not limited to one statue, one conversation nor one course of action. The conversation will not end when the statue is gone if the people who care about more than the statue are dedicated to continuing it. We have to accept responsibility for our roles in this work and understand everyone is not in the same place or called to the same tasks. It is still possible to work with them and build on their actions.

The removal of statues in the US and Bristol in the UK reignited the conversation about the Christopher Columbus statue. It does not mean we are going to ignore everything and getting rid of the statue will be the end of our work. What is happening around the world is the building of momentum. It is creating a wave of actions that are inspired by those that precede it. Now is a good time to make moves.

If some of us want to talk about systemic racism in this majority black country — much to the chagrin of the people who benefit from it — and other people want to move a statue and we see the connections between the two, let’s talk about it. Note the commonalities. Support the action. Bring context to the conversation. Know that we can do both.

Let new people in and let them learn and grow

Many of the people participating in conversations about current events and underlying systems are new to them. Some are just becoming radicalised as they watch what is happening around us. Sometimes the instinct of more seasoned activists is to silence or push them out, insisting they are not ready, they will get in the way, or they are too late. It is often a protective measure. We do not want to see the work go to waste and we do not want movements to be co-opted.

Locking people out, however, is the result of leading with fear. It may be completely reasonable to have concerns about people’s intentions, especially when they come to a cause like Black liberation at a time like this, but we always need more people. Those of us who have been here before have the responsibility to help newcomers to learn, practice, correct mistakes, be open to new information, share ideas and bring more people. We cannot do it alone.

There has to be space in movements for newcomers and that space has to be actively created. We can easily pinpoint organisations with leaders who have refused, over many years, to train other people for leadership and ensure the continuity of the work.

The newcomers do not need to immediately become leaders, but they need to be welcomed and have a place to learn, work and grow. They need to have access to information, be connected with supporters, get experience with the media, know how to plan events, and understand the history and the trajectory of the movement.

In last week’s discussion on racism and injustice, we took a look at some of the responses to the Black Lives Matter protests in the U.S. and thought critically about their usefulness. When is an action or response appropriate, and when it is inappropriate? Which actions are we uncertain about? What lessons can we learn from failed responses and successful responses? Check out the video, varied thoughts about specific actions, and ways to assess our idea before we take action.

In the coming weeks, I will be hosting a discussion series with young people in the Queen’s Commonwealth Trust (QCT) network about the Black Lives Matter movement in the U.S., racism and injustice in Commonwealth countries, solidarity, allyship, and the work to eradicate racism. These conversations are often difficult to have, but they are necessary, and there is a lot for us to learn from each other. In this first conversation, Izzy, Mike, and I ask broad questions to give us a sense of how everyone is feeling, what people are thinking about, and which topics we need to focus on exploring in upcoming sessions.