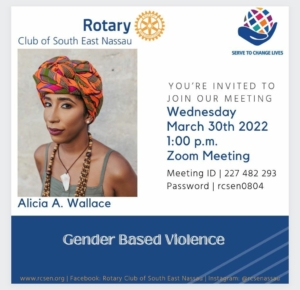 March is always packed with speaking engagements due to International Women’s Day. I’m always happy to see the conversations continue well past March 8, so I’m looking forward to attending this week’s Rotary Club of South East Nassau meeting to talk about gender-based violence. Last week was full of terrible news, so there are many examples to use in this sessions and, more importantly, put in the context of structural gender-based violence and the reform we need. 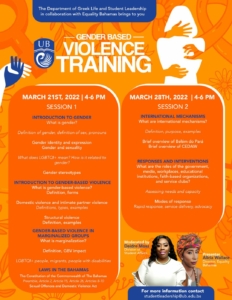 As a part of the activities planned by Equality Bahamas, I’m looking forward to facilitating gender-based violence training for student at University of The Bahamas over the next few days. These sessions will cover the basics of gender, sex, and sexuality, look at domestic violence, intimate partner violence, and structural violence, review a selection international mechanisms and laws of The Bahamas, and guide participants through development of responses and interventions.

Last week was quite busy as I worked with the all-volunteer team of Equality Bahamas to plan and execute our annual International Women’s Day events. Every year, this process leads me to think about a range of issues, circumstances, gaps and solutions. From people – primarily young women – adding to their regular workloads as volunteers with non-governmental organisations to the response of the public to initiatives designed for and by women, there is no shortage of necessary discussions.

After the march and expo, I came across a Facebook post by someone I’ve known since elementary school. This is not a person I spend time with nor have intimate knowledge of, but I know basic facts such as her name, profession, close friends and other bits and pieces anyone can glean from shares on social media. I did not know anything about her position on political or social issues. Then I saw a days-old post about the (then) upcoming march I organised with a team of dedicated, enthusiastic young women. The post basically said she would definitely not be marching after being duped by We March which proved to be something other than the organiser had suggested.

There were three main commenters, two of whom completely agreed with the post. One person noted it was an unreasonable position to take, unfair to paint women organisers with the brush of a reckless person, and important to properly use non-violent forms of protest.

I struggle to find a word for the way I felt when I read this thread. “Disappointed” is not quite it. I know better than to expect everyone – or even most people – to get on board. I have come to expect naysayers and finger-pointers. I know people find it easy to call other people’s work garbage – and this is a euphemism for the word used – than to do the work themselves. Still, it is almost as though I expected more from this particular person. Why? Because I “know” her? Because she has never shown any signs of being against the expansion of women’s rights? Because she is a young woman and business owner who has surely experienced misogyny and sexism, and has definitely been disadvantaged by the systemic issues we have yet to properly address? Because I think she should care?

In reflecting on this experience, I have been reminded of two important lessons I have learned over the past few years. The first is that it is important to take conversations about rights, justice and feminism outside of the comfortable spaces. The Equality Bahamas team can talk about national issues and what needs to be done to tackle them all day, every day, but it would not change anything. We have to take our critique, our ideas and our plans of action outside of our own space, engage others in the conversation and convince them to take action with us.

The day-to-day hustle to get to and from work, figure out how to pay the bills and keep groceries in the house and take care of the unexpected does not leave us much room for imagination. All some of us have is the memory of what has already taken place and the heaviness of the current situation. Reality does not encourage us to dream. If we never take the time to think beyond what we have, to envision what we do not yet see, we are doomed to a future that looks exactly like the present. To get beyond this point, we have to identify and deconstruct the systems that find homes within people and we have to create opportunities for people to imagine, create and realise more.

Leaders of organisations, movements and people have a responsibility to the people under the sound of their voices. They have to be more than charismatic. They have to be honest. Loyal. Communicative. Accessible. They have to be able to answer questions about where they want us to go, why and how we will get there. They have to be willing to go the distance, to train, mentor and elevate others to take the position they must eventually vacate. They have to do what they said they would do. They have to prove themselves worthy of the trust and support they receive. When they fail to be and do all of this, and without apology, we end up where we are now. We find ourselves surrounded by people who are disappointed, hurt and unwilling to act.

No one fighting for a cause can hope for another’s downfall. The failures, missteps, compromises and disappointments of one can negatively impact others, even when they seem completely unrelated. How can we reactivate imaginations that have been dormant for so long? This may be the challenge of this generation of changemakers – to reactive imaginations so we can see something better, then believe we can make it happen.

Why whistles don’t get to the root of the issue

When Philip “Brave” Davis suggested the government provide women and children with whistles, there was no way to keep it out of the headlines. Yes, he made other recommendations, but this one deserved a response. The knee-jerk reaction grazed the surface, but did not quite go deep enough to explain what is really wrong with the suggestion.

The whistle is not a new idea. Many of us are familiar with the “rape whistle”. We are expected to be equipped with these whistles and, should we feel unsafe, we are to blow the whistle.

The first issue is that the answer to an issue is not in the response of the person on the receiving end. Gender-based violence is a systemic issue. Gender is a social construct that prescribes ways of being for people based on the social and cultural expectations of each gender. Gender-based violence is the name for harm caused that is directly related to understandings of gender and how it controls us.

The man who attempts to harm a woman because she is seen as weaker and meant to be submissive is not likely to be scared off by the sound of whistle for various reasons. The whistle has to be accessible enough for the woman to blow it. If is it around her neck, it can become a weapon for strangulation. If it is loose, held in her hand, it can be knocked out. If she gets it to her mouth, she risks more physical injury because she could be caused to choke, or she may be struck. If she manages to use the whistle to make noise, this could aggravate the man and lead to further harm.

The second issue is the uncertainty about its effectiveness. Do we know what to do when we hear a whistle being blown in a parking lot? Is a Junkanoo group on the way? Is someone practising for sports day? Did a child get a new toy? What are we, as citizens, supposed to do when we hear a whistle. Do we know when it is a distress signal as opposed to something else, and do we know how to intervene if we determine it is a distress signal? On Saturday, we distributed whistles and one of the women decided to blow it in a public space when approached by a man she knew. Luckily, she was in no danger, but she noted no one paid any attention at all.

Women and girls are always told what to do and what not to do in order to prevent acts of violence against us, especially rape. Nowhere near as much effort is put into teaching consent, making a distinction between sex and rape and engaging men and boys in conversations about gender-based violence prevention. We need to get to the root of the issue. The problem is not that women and girls are not scared enough, vigilant enough, or bombarded with enough products – like mobile apps to indicate to friends that we’re in distress, pepper spray, and date rape drug-detecting nail polish – to prevent violence against us. The problem is that all the focus is on us and ways we can make sure the less prepared women or girl is the victim instead of us. We do not want to make someone else the statistic. We want to change the statistics. To do that, we need to start at the root, and not create another path to stress and further harm.