Minister of Social Services Frankie Campbell spoke in Parliament about the work being done by the Department of Social Services. He noted, without call it by name, that the issue of domestic and intimate partner violence had been raised numerous times. I waited, with the tiniest bit of optimism, for him to announce systems and services to address this pervasive issue that is only exacerbated by current conditions. Instead, he said: “This is a time when [abusers] should reflect on the errors of their past and try to make amends[…] repent of their ways and seek to build those bridges that they would have broken down.”

First, not many people watch Parliament. This was made clear by the comments on the livestream which indicated that viewers had no understanding of processes (which, admittedly, are often time-consuming and make little difference). Second, abusers do not tend to take instruction from Ministers of Social Services through a screen. Third, abusers are not short on “apologies”. They do not, however, relish taking responsibility for their actions, being remorseful, or taking the necessary step to reform. This is why there is a cycle of abuse and there are many PSAs that show the stage where the abuser brings the survivor flowers, convinces them to stay – then repeats the abuse.

Campbell did not offer a solution. He did not even offer support for survivors. He noted the issue was raised and did exactly what everyone thus far, including the Prime Minister has done. He said words that meant nothing.

We need a hotline specifically for domestic violence. We need police officers trained on domestic violence intervention to answer those calls. We need more safe housing for survivors. We need a residential programme for people going through withdrawal from alcohol and putting their households at risk. Systems and services, not apologies. The Department of Gender and Family Affairs should be leading on this. It, apparently, has a gender-based violence coordinator. What, exactly, is the department doing? It is definitely not responding to requests for meetings to discuss issues of gender in the country, so the least it could do is use whatever expertise it has in its own staff to anticipate, identify, strategise and respond to issues and give advice to the minister who is clearly out of his depth.

Following the weekend lockdown on short notice, introduction of a grocery shopping schedule and the announcement of a complete shutdown from Wednesday night to Tuesday morning was no great surprise.

Grocery store lines have been wrapped around buildings all week. Some stores chose to ignore the shopping schedule. Even worse, senior citizens and people with disabilities – given Tuesday mornings to shop and the option to shop on the day assigned by last name – were turned away from several stores on Monday. When challenged, store staff told them they could use “discretion”. This is disgusting and unacceptable. Community members and advocates have been pushing for policies that consider and respond to specific vulnerabilities.

It is cruel and reprehensible that anyone wielded power, claimed “discretion” and denied entry to senior citizens and people with disabilities who made their way to the store at the appropriate time. Those people need to be dealt with and the government needs to make clear its orders are not open to interpretation or discretion. They are to be followed and the dignity of people doing their best to navigate this crisis must be kept intact.

Dr Minnis and his team need to reassess their tactics and realise they are creating the panic they are trying to avoid. They, unfortunately, promised not to close grocery stores and have not honoured that. No one knows what to expect. The uncertainty, lack of trust and loss of control will not serve us; nor will incremental, ever-changing measures that result in large crowds assembling in order to meet their most basic needs.

There have been many criticisms as a new world is shaped by COVID-19. Our lives are changing based on the decisions made by governments and residents. Our government is far from perfect. It has made many mistakes that are fairly easy to pinpoint now. We, however, are not blameless. We have also made mistakes and we continue to err. We make bad judgments, posture as experts after very little study and believe ourselves better than everyone else. We are frequently unable to see beyond on our experiences and cannot be convinced to even try to look a little further. This is one of the reasons so many people, however close they may be to it, do not understand poverty.

Poverty is not a choice. It is not a series of decisions. It is not the consequence of a personal failing. It is a both a system and the failure of systems. It linked to race and gender, thrives on the inequal distribution of wealth and other resources and depends on us to blame it on the people living through it. Poverty steals decision-making power. It is a beast, looming every day, taunting the people trying to get around it.

Poverty is not just a minimum wage cheque. It is no cheque at all. It is five dollars here and eight dollars there for hair-braiding or coconut water. It is only having enough to get two of the five ingredients you need to make a meal. It is almost daily visits to the grocery store because there isn’t enough money to get food for the week. Minnis has memory of this and painted the picture in Parliament on Monday, but offered no relief to the people who know it best today. The grocery shopping schedule gives people three opportunities to shop every week except this week. What is going to happen, over the next five days, to the people who do not have more than five or eight dollars to shop at a time?

Tips to get through

For those who are not accustomed to spending this much time at home, this is a difficult situation. It is also challenging for those who enjoy being at home, but also appreciate the freedom of being able to go out to eat, sit by the beach, or visit family members and friends. Being restricted, in and of itself, feels like a punishment. In addition to thinking positively about this exercise and the lives we are saving, it is important to figure out how we function best and create the environment we need.

We do not know how long this will last, but let’s prepare ourselves as best we can. Let’s do our best to help others. Let’s follow the guidelines and flatten the curve. Maybe we can find joy in the little things for a little while.

We Need a Proper Plan, Not Just Reactions 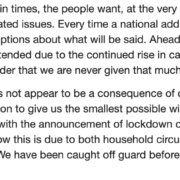 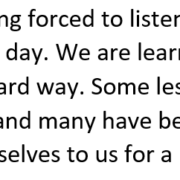 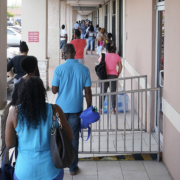 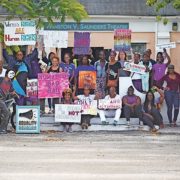 Culture Clash: Minute-by-Minute Decisions Will Not Work on COVID-19
0 replies

We Need a Proper Plan, Not Just Reactions
Scroll to top